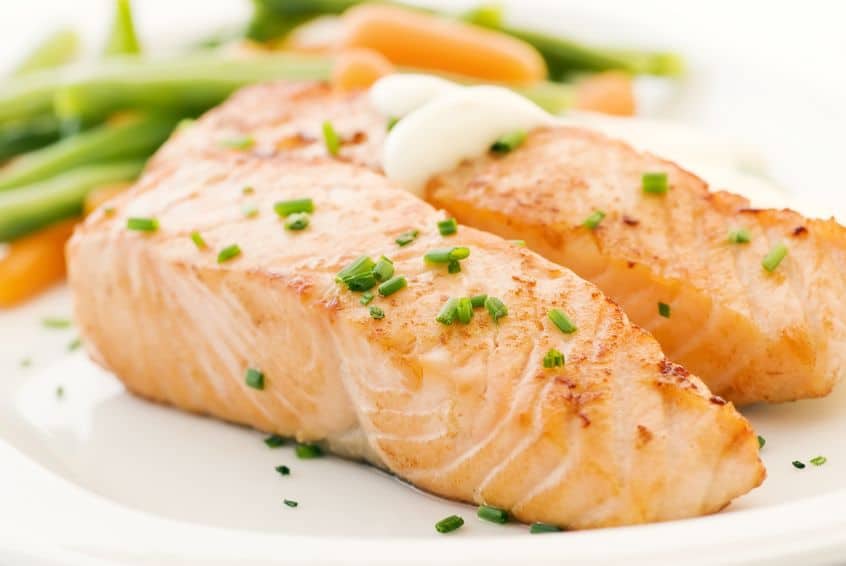 Over the last few decades, salmon’s popularity has soared among American shoppers. Consider this fact; in 2012, salmon became the most consumed fish in terms of volume in the United States. There is good reason for this trend, as a serving of salmon is loaded with a seemingly endless supply of various nutrients. Another factor that makes salmon so alluring is the many ways in which it can be prepared. Whether it’s baked, poached or grilled, salmon offers a meal that is both appealing to the taste buds and nourishing to the body.

Before we get to the options for cooking salmon, let’s take a look at the health properties of this well-known fish. As is made clear by the following data, salmon’s many benefits earn it a place in your diet. A three ounce serving of raw Atlantic salmon provides the following nutritional value:

Poaching – For those not familiar with this culinary term, poaching refers to an item that has been cooked in liquids at high temperatures. Ranging between 140 and 180 degrees Fahrenheit, liquids used to poach foods don’t quite reach the boiling point (212°F), but are still strong enough to cook delicate items like eggs and fish. It should be noted that poaching temperatures don’t exhibit the telltale bubbles associated with boiling, so a cooking thermometer might be needed.

Salmon are usually placed in saucepans when being poached. After adding your liquid of choice (water, wine or milk can all be used), allow the salmon to sit for about ten minutes. When poaching a salmon, make sure to use a shallow saucepan, and to use just enough of your preferred liquid to barely cover the salmon.

Steaming – To steam fish, it helps to have the proper tools for the job. With this in mind, it would be useful to pick up a steamer pot. To steam salmon, begin by adding ½ inch of water to your steamer pot. Place the pot on one of your stove’s burners. When the water has reached its boiling point, place the steamer insert into the pot (an insert is a basket-shaped container perforated with tiny holes). Place the salmon onto the insert, and place the lid on the pot. It should take about 10 minutes for your salmon to cook.

Baking – There is more than one way to bake salmon (or any type of fish for that matter), but the healthiest approach is to minimize the use of butter or oil. Begin by preheating your oven to 400°F (your oven should beep or turn on a light when it has reached the desired temperature). Place each piece of salmon on its own sheet of foil. Carefully pour a small amount of olive oil onto each chunk of salmon, and then fold each side of the foil over the fish. Be sure to seal the foil by rolling the two edges together. It should take between 20 and 25 minutes to fully bake the salmon; you can tell if the salmon is baked when its texture becomes flaky.

Grilling – Grills cook various foods using dry heat. If your salmon is skinless, then you will need to wrap it in foil before grilling. Without foil, skinless salmon can fall apart while on the grill. Preheat the grill to medium high temperatures; you might also want to oil your grill before cooking the salmon. After waiting about six to eight minutes, flip over your salmon pieces with a spatula. It should take another six to eight minutes to finish cooking the salmon.

Broiling – A number of people prefer broiling their food instead of grilling it. To be sure, this option can be very beneficial to your health. Properly broiling meat requires much less oil, which translates into much fewer calories added to the meal. The broiling process also purges a large amount of fat from meat, causing it to melt away and accumulate at the bottom of the broiling pan. As an added bonus, broiling pans can be purchased at relatively low prices.

To broil a salmon, begin by position your oven rack at an appropriate distance from the oven’s broiler, which is commonly located at the top of most modern ovens. Aim for about 7 to 8 inches between the rack and boiler. Once you have placed the broiling onto the rack, close the oven door and preheat the oven.

While the oven is reaching broiling temperatures, turn your attention to preparing your salmon. Tear off a piece of aluminum foil and spray it with nonstick cooking spray, which should prevent the salmon from sticking to the foil. Place the salmon on the foil sheet; if the salmon piece still has skin, place the side with skin on the foil. The salmon fillet can now be seasoned with reasonable amounts of olive oil (1 teaspoon), salt (1/2 teaspoon) and black pepper (1/2 teaspoon). Use the olive oil first before getting to the black pepper and salt; you can use your fingers to rub the oil into the salmon, but you should wash you hands after doing so. Roll up the ends of the foil so that the sheet fits on the pan.

When your oven’s preheating signal goes off, put on an oven mitt and open up the oven door. Carefully pull out the rack supporting the broiling pan. Place the foil with the salmon on the pan, close the oven door and let the salmon cook for 10 to 15 minutes. When the salmon is ready, remove the pan from the oven and let it cool atop some hot pads on your counter.