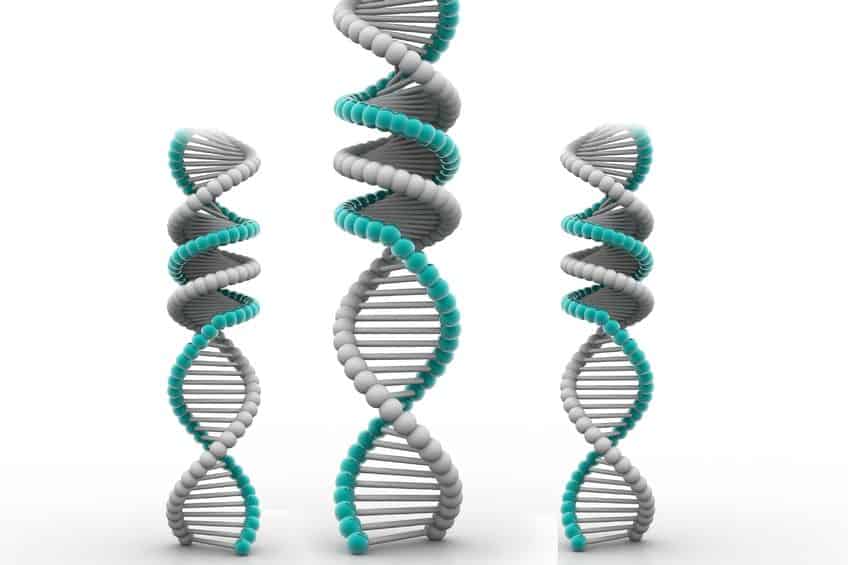 Why Genetics Can Influence Your Weight

When it comes to the major health issues in the developed world, obesity ranks near the top of the list. Over the last several decades, the US obesity rate has risen dramatically, reaching 36 percent in the year 2010. Furthermore, an alarming two-thirds of American adults are either obese or overweight. Given these statistics, it’s not surprising that hypertension, cardiovascular disease, diabetes and stroke are such common problems in the United States.

An expanding waistline is usually viewed as a self-inflicted problem. To be sure, a sedentary lifestyle combined with a steady diet of chips, fast food and soda is a surefire way to gain extra pounds. However, you may have noticed that some people are more prone to wild weight fluctuations than others. Like numerous other traits, body weight is often influenced by the genes within our DNA.

Putting the “Fat Gene” Under the Microscope

The August 2013 issue of The Journal of Clinical Investigation (JCI) included a report detailing the relationship between certain genes and obesity. Specifically, the study focused on a variation of the FTO gene, which is carried by one in six people. Past research has unearthed a connection between genes and obesity risk; those who possess this FTO variant are 70 percent more likely to wind up obese. Until very recently, medical professionals lacked a solid explanation for this correlation.

The study that appeared in the JCI was lead by researchers from the United Kingdom, through it also included contributions from German and Japanese doctors. One of the experiments conducted for the study involved two sets of male volunteers. Half of these men had two copies of the “high-risk” variation of the FTO gene, meaning they had a greater propensity for weight gain. In contrast, the other set of participants had a pair of the “low-risk” variant. As you might expect, obesity tends to be less prevalent among people with the “low risk” FTO gene.

Each of these subjects had their levels of acyl-ghrelin measured after an overnight fast. Acyl-ghrelin is a hormone that stimulates the body’s appetite; the more of it you have coursing through your bloodstream, the hungrier you generally feel. This initial test revealed that both sets of men had roughly the same level of acyl-ghrelin. The volunteers were then fed a meal, and subsequently underwent a second round of testing.

Food proved to have a noticeable effect on the men with the high-risk FTO, serving to increase their acyl-ghrelin levels. Additionally, these subjects had difficulty suppressing hunger pangs. Conversely, the volunteers with low-risk FTO had lower amounts of acyl-ghrelin in their blood, and were better equipped to control their desires to eat.

Aside from measuring acyl-ghrelin levels, MRI scans were also used to gauge the appetites of study’s participants. These scans recorded the men’s brain activity after viewing images of various foods. Once again, the presence (or lack thereof) of the high-risk FTO gene proved to be the deciding factor. Researchers found that the two groups had differing responses when viewing the pictures. These differences were concentrated in the sections of the brain tasked with operating various internal mechanisms, including appetite.

Not satisfied with just performing blood tests and MRI scans, the study’s authors also extracted blood cells from both sets of volunteers. Cells grown in controlled conditions, known as cultured cells, were also thoroughly examined. The researchers collected these cells in order to record the amount of information the FTO gene transmitted to the cell’s structures, a process referred to as gene expression. In both types of cells, gene expression was found to be more pronounced in the high-risk variant of the FTO gene. In turn, the study found that this additional info lead to higher levels of ghrelin. As its name would indicate, the body regularly converts ghrelin into the aforementioned acyl-ghrelin hormone.

Thanks to this collaborative effort, health professionals now have a possible answer as to how genetics can influence food cravings. This research doesn’t mean that people with the high-risk FTO gene are destined to become overweight or obese. Though genes may make the reaching weight-loss goals more of a challenge, a combination of healthy dietary choices and regular exercise can still shed many unwanted pounds.