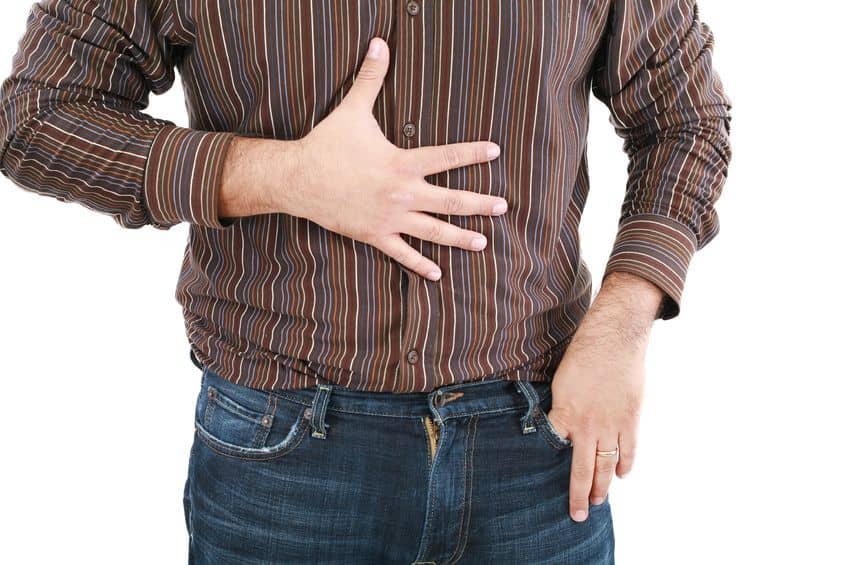 Fire in the Belly (and Intestine): A Closer look at Ulcers

In the past, you might have heard someone complaining about having an ulcer, and allude to how miserable this condition makes their daily life. These unfortunate individuals aren’t lying, as ulcers often lead to a barrage of symptoms that can flare up on a regular basis. Thanks to the wonders of modern medicine, many ulcers can be treated with relative ease, though it is still prudent to take preventative measures against this condition.

Ulcers tend to strike the major areas of the upper gastrointestinal tract. A peptic ulcer occurs when a tear develops in the stomach lining, the term used to describe the inner layer of tissue on the stomach wall. When such tears develop in the top section of the small intestine, they are referred to as duodenum ulcers.

Up until the early 1980s, doctors generally believed that the culprits behind ulcers were a trio of familiar villains – alcohol, stress and spicy foods. Though this explanation made sense, the true cause of ulcers turned out to be something far different. In 1982, two doctors discovered Helicobacter pylori (mercifully abbreviated h. pylori), a strain of bacteria that festers inside the stomach.

H. pylori can be a clever foe, avoiding the stomach’s devastating acids by taking shelter in the stomach lining’s crevices. Once it has established its foothold, the h. pylori bacteria begins producing a steady supply of ammonia, effectively counteracting the effects of the stomach’s acid in the surrounding area. In turn, this allows other types of harmful bacteria to grow unimpeded, resulting in the formation of ulcers.

In some individuals, ulcers do not lead to any discernable symptoms, and the patient does not see any disruptions in his or her daily life. For others, unfortunately, these open sores can make their presence quickly known, causing the patient to experience the proceeding symptoms:

As bad as these symptoms are, some especially unlucky patients suffer from intense ulcers that cause the following additional problems:

With the discovery of the h. pylori fundamentally changing the way doctors treat ulcers, medical science soon developed new tests for identifying the presence of these troublesome bacteria. Patients suspected of having ulcers are usually given one of four tests, though occasionally two or more might be necessary.

Urea Breath Test – This is the least invasive (and probably least distressing) method for testing for ulcers. The patient is first given a special solution to drink, which is then consumed by h. pylori once it has reached the stomach. The doctor will then take samples of the patient’s breath, seeking to measure the amount of carbon dioxide exhaled. An elevated amount of CO2 is indicative of an ulcer.

Stool Antigen Test – Here’s where it starts getting unpleasant. As its name indicates, this test involves examination a patient’s fecal matter for h. pylori.

Blood Test – This method calls for extracting a blood sample from the patient. Though the h. pylori bacteria itself will not be in the blood, a patient with an ulcer will likely have h. pylori antibodies in his or her bloodstream.

Upper Endoscopy – It’s a safe bet to say that no one looks forward to getting an upper endoscopy. This procedure involves inserting an endoscope into the patient’s stomach through the throat. Endoscopes are tube-like devices with a light and video camera mounted at one end. Using this instrument, doctors are able to examine the stomach and small intestine for the presence of h. pylori. A doctor might also decide to perform a biopsy, in which a tissue sample is removed and tested for the h. pylori bacteria.

Though ulcers are no walk in the park, many of them actually heal on their own. Consequentially, some particularly headstrong patients decide to skip medical treatment entirely. For those not too keen on riding out the storm, doctors usually prescribe a combination of two antibiotics for cases in which h. pylori is present (this bacteria is behind 80% of stomach ulcers and 95% of intestinal ulcers). Many of these patients are also given a proton pump medication (PPI), which works to reduce acid levels in the stomach, giving the antibiotic medications time to repair the ulcer.

Ulcers can also be caused or at least aggravated by NSAIDs, common pain medications that can often be purchased without a prescription. A patient might be advised to stop taking NSAIDs should they be identified as the root cause of his or her ulcer. Alternatives to NSAIDs include acetaminophen, which is sold under the brand name Tylenol.

In rare cases, surgical procedures will be necessary to adequately repair an ulcer. Doctors only resort to this option if the ulcer is particularly severe and/or is bleeding. Surgery might also be required if the stomach is producing an overabundance of acid. To stem acid production, a surgeon might remove certain parts of the stomach, or enlarge the stomach’s base.

There are certain sets of people who face an elevated risk of developing ulcers. These unlucky groups include smokers, regular alcohol drinkers, people over age 50 and those with a family history of ulcers. A patient might also suffer from ulcers if they have been previously stricken with diseases impacting the heart, lungs and kidneys.

Even if you do not fall into a group with high-risk of getting ulcers, it is still worthwhile to try and avoid developing such painful openings in your stomach and intestines. Below is a list of tips that have been proven relatively effective in keeping ulcers at bay.