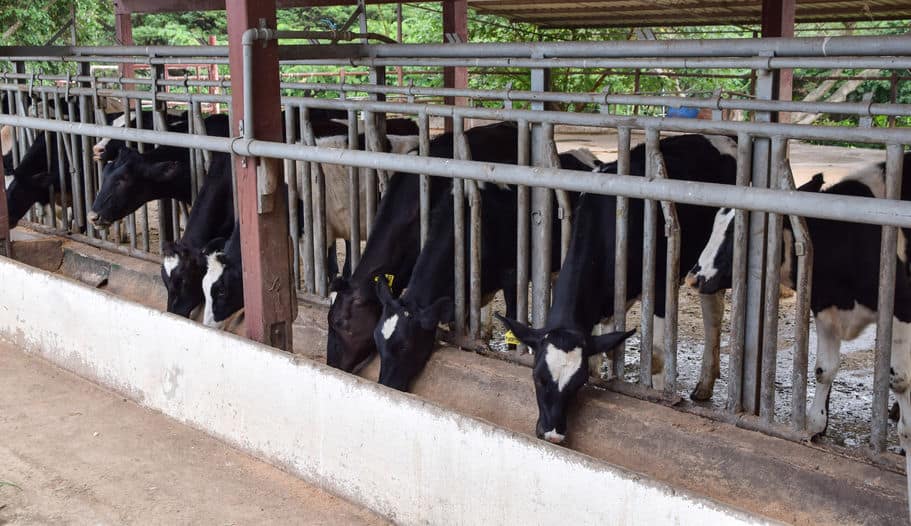 Farm Animals and the Spread of Superbugs

The term “superbugs” is the source of much concern for health officials worldwide. These microbes have developed the ability to fight off antibiotics, making them much more difficult to destroy if they infect the body. While stories on antibiotic-resistant bacteria often focus on hospitals and medical facilities, sickened livestock may also facilitate the spread of these resilient germs.

A Stronger Breed of Germ

Researchers at the University of Edinburgh have found that a specific superbug might have migrated from farms to UK Hospitals. The team’s findings concern a certain strain of MRSA (methicillin-resistant Staphylococcus aureus) known as CC398. The human variant of CC398 now differs from its animal counterpart, though the strains are believed to have originated from the same type of bacteria.

In livestock, such microbes are strong enough to beat back some antibiotic medicines. Because of this trait, treating farm animals infected by CC398 bacteria can be a rather difficult task. Frequent antibiotic use on farms might be to blame for this germ’s increased durability.

From Animals to People

Thanks to a new analysis method, the authors successfully mapped the genetic code of CC398 found in the UK. With this step complete, the team then compared their data against different CC398 strains, which had been identified in people and farm animals across the globe. The study concluded that this bacteria is capable of making the leap from livestock to humans, and has already done so on “many occasions.” Furthermore, this research also suggests that animal CC398 bacteria may pose a risk to hospital patients.

Dr. Melissa Ward, the study’s lead author, argued that both livestock farms and medical facilities should take precautions against this microscopic threat. “Our findings emphasise the need for strict biosecurity practices in the food production industry, as well as continued surveillance and infection control of MRSA in hospitals,” stated Ward. “Responsible use of antibiotics in healthcare settings and agriculture is of utmost importance.”

Are Farm Workers at Risk?

A 2014 study reported that MRSA could spread from hogs to those working on farms. This research examined a total of 22 farm employees. Over a one week span, the participants were required to swab the inside of their noses twice per day ‒ once in the morning before their shift began, and again during the evening hours. Each worker was told to collect samples on days they worked on the farm, as well as on their off days. Finally, the participants submitted two additional samples on the last day of the study.

The nasal swabs revealed that Staphylococcus aureus was commonplace among the subjects, showing up on 19 of 22 hog farm workers. This doesn’t mean that S. aureus sickened 19 of the study’s participants; in fact, in most cases this bacteria causes no ill effects. Moreover, S. aureus is hardly an exotic microbe; the Centers for Disease Control and Prevention (CDC) states that 30% of people have this bacteria residing in their noses.

However, the samples didn’t just uncover human strains of S. aureus. During the course of the two week study period, staph bacteria found in livestock was at least occasionally present in sixteen workers. Furthermore, ten hog farm employees qualified as persistent carriers livestock-associated S. aureus. These individuals had such bacteria in either all or almost all of their swabs. A form of S. aureus resistant to multiple antibiotics, known appropriately as multidrug resistant Staphylococcus Aureus (MDRSA), was persistently found in six subjects. Swabs from one participant consistently contained MRSA.

Some of the S. aureus microbes displayed signs of relative longevity, appearing in samples from employees who hadn’t worked in four days. The authors contend that this lingering staph bacteria may be problematic, as workers could conceivably spread S. aureus to family members inside their own homes. As a result, potentially harmful staph bacteria might disperse further throughout the surrounding community, perhaps even reaching hospital environments. To determine if hog farm workers are indeed passing on drug-resistant bacteria to others, the researchers plan to study the issue further.

In a news release detailing his team’s work, lead author Dr. Christopher D. Heaney stated that his group is “trying to figure out if this is mainly a workplace hazard associated with hog farming, or is it a threat to public health at large.” According to Heaney, this goal not only involves documenting how long livestock bacteria stays in the noses of farm workers, but also studying how the prolonged presence of such microbes impacts the health of farm employees, their loved ones and the communities they live in.