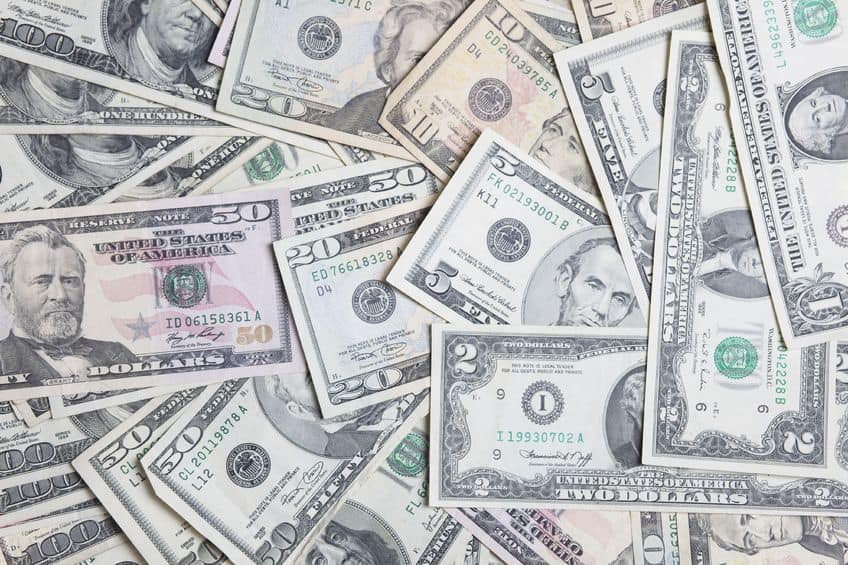 There are certain public surfaces where bacteria tend to congregate, such as public drinking fountains, shopping cart handles and ATM buttons. Given that many people touch these objects throughout the day, this fact shouldn’t come as much of a surprise. Another frequently-touched place where germs tend to fester is money. While paper notes generally aren’t considered major threats to public health, they can harbor quite a few types of undesirable bacteria.

Money Under the Microscope

Care to guess the most widely circulated bill in the United States? The answer, as you might expect, is the one dollar bill. In fact, $1 notes see so much action that they have an average lifespan of only 21 months. Hundred dollar bills, in contrast, usually last around seven years.

Of course, given how frequently they are used, a one dollar bill picks up quite a lot of germs while it’s in circulation. For this reason, a team of researchers from New York University (NYU) decided to study the DNA scattered on these notes. Thanks to high-speed gene sequencing technology and computerized databases, the research team was able to identify far more species of DNA than previous studies.

Stunning as it might sound, the NYU researchers found more than 3,000 distinct types of bacteria on their bills. This doesn’t mean, however, that you should immediately discard the $1 notes in your wallet. The most common germ found was the bacterium known for causing acne.

Still, there is reason to be somewhat concerned by the study’s findings. Some of the germs found on the notes were linked to serious health problems, such as gastric ulcers, pneumonia and staph infections.  Furthermore, bacteria equipped with antibiotic-resistant genes were also identified.

Previous research has also documented money’s lack of cleanliness. A 2001 study, released by the Wright-Patterson Air Force Base Medical Center, examined a total of 68 one-dollar bills. To better determine how much bacteria accumulates on money, the researchers swapped newer $1 bills for older notes.

Of the 68 bills studied, 64 were found to have at least some degree of bacterial contamination. Furthermore, 59 of the notes harbored microbes that could pose a risk to hospitalized patients, along to those with weakened immune systems. While the study did not prove that bacteria-laced money can lead to infection, it did raise the possibility that money could facilitate the spread of harmful bacteria.

Plastic to the Rescue?

Imagine paying for various items with money made from plastic. Believe or not, a number of countries have begun to print notes on sheets of plastic polymers. The reason for this trend is plastic’s superior durability compared to cotton and linen, the materials often used for paper notes. Some countries currently using plastic notes include Australia, New Zealand, Romania and Vietnam.

Aside from a longer lifespan, there is some evidence that plastic might provide a less hospitable environment for bacteria. Research conducted by Australia’s University of Ballarat compared bank notes from ten different countries, including the United States, United Kingdom, China, Nigeria, New Zealand, Mexico and Australia. The only plastic notes included in the study came from Australia, New Zealand and Mexico. The money from the remaining countries was made largely from cotton.

The researchers collected their samples from food-selling establishments, including cafes, supermarkets and butcher shops. After reviewing a total of 1,280 notes, the study’s authors determined that bacteria was much less common on plastic money. The average polymer note housed only ten germs per square centimeter. In contrast, the amount of bugs on the dirtiest US notes was nearly thirteen times higher. Likewise, germs were four times more prevalent on cotton-based Mexican notes than those made with plastic.

A 2013 study came to a different conclusion on this subject. Published in the journal Antimicrobial Resistance and Infection Control, this research compared bacterial growth on seven different currencies. Of all of the different notes tested, bacteria samples survived the longest on the Romanian leu, a currency made with plastic polymers.

While there is no doubt that the surface of money is covered with bacteria, the actual risk posed by these microbes is still a matter of debate. In addition, it will likely take additional research to determine if plastic notes represent a sanitary alternative to paper money. In the meantime, it would be wise to not only wash your hands regularly, but to keep them away from your eyes, nose, mouth and face.