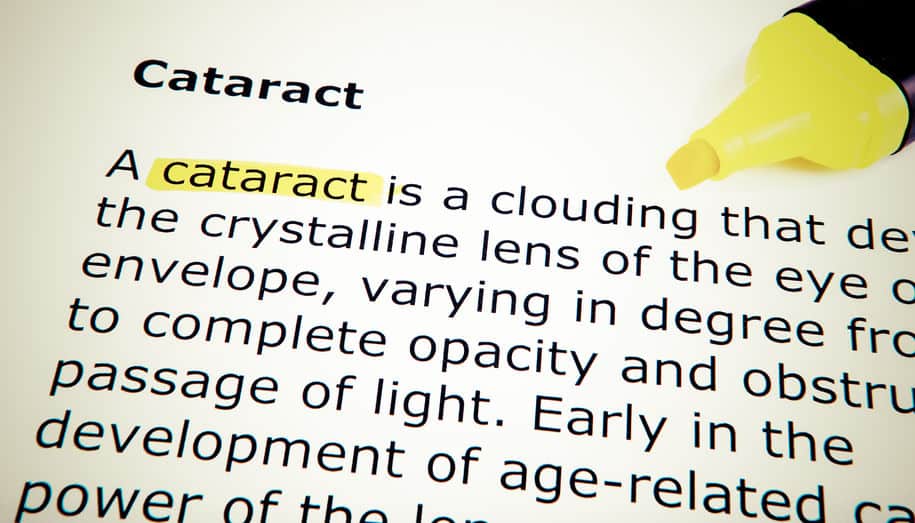 Like the rest of the body, the eyes are not immune to the ravages of time. In their later years, many older adults develop eye cataracts, a disease that often leads to seriously diminished vision. A recent study may help doctors better understand why cataracts form, and may even lead to new methods of treating this condition.

Eye cataracts affect a part of the eye known as the lens. The lens is tasked with directing incoming light towards the back of the eye, where it is absorbed by a layer of tissue called the retina. In turn, the retina converts this light to nerve signals, and ships them to the brain via the optic nerve. The muscles attached to the lens allow this nearly transparent structure to change its shape, giving it the ability to focus on items at various distances.

In order to provide the retina with a clear image, the lens needs to remain clear.  Cataracts form after protein accumulates within the lens, causing it to take on a cloudy appearance. Consequently, the light rays that enter the eye are either blocked or distorted. The symptoms typically associated with this disease are shown below:

A Failure to Communicate

According to research published in the journal Proceedings of the National Academy of Sciences, poor communication between biochemical pathways plays a role in the onset of cataracts. Essentially, the term “biochemical pathway” is used to describe a series of connected chemical reactions, which occur in all living organisms. This research directed its focus toward two such reaction chains, known as the ubiquitin and calpain pathways. The former helps remove proteins from the lens that are either damaged or no longer needed.

For this report, the research team studied the lenses of a group of mice. Thanks to these rodents, the authors determined that the ubiquitin and calpain pathways regularly interact with each other. After communication between the two pathways broke down, calcium began to seep into the cells that make up the lens itself, causing the activation of another biochemical pathway. This third pathway enables proteins to pile up within the lens, leading to the formation of cataracts.

Tufts University and the Weizmann Institute of Science were among the organizations to contribute to the study. The researchers believe that their work could be used for the development of new cataract medications. Moreover, they also contend that the study may help shape dietary guidelines aimed at hindering the progression of cataract symptoms.

Finally, it is possible that the ubiquitin/calpain pathways may communicate at other points within the body. If this is in fact the case, the authors theorize that such interactions could provide useful information about other conditions that feature abnormal protein buildup, such as Alzheimer’s disease and Parkinson’s.